The age limit was extended in 2005 to enable children to stay on in the class post-secondary transfer.

Trilby Lawlor established the first special class for gifted and interested primary aged children in 1981 for the Inner London Education Authority. The class ran until 1997.

Tracking the construction of a new central London building through art with seven local primary schools.

Kings Place is on the Regents Canal behind Kings Cross. It has two art galleries and two concert Halls and is the home of the Guardian Newspaper.

One day G&T workshops for London children and their teachers at VLF. 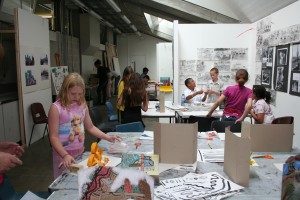 Exhibition at the VLF opened by Margaret Hodge (Minister for Children)

Funded by The Cripplegate Foundation

The figure in art in the primary school